This quiet community of about 500 homes is located in north Baltimore City and adjacent Baltimore County. It is strategically located between major universities and hospitals, and within minutes of prime shopping and business facilities. Bellona-Gittings is widely admired for its attractive residential architecture and landscaping.

The history of Bellona-Gittings, from Native American settlement to the present, represents a long evolution of land uses and architecture that have merged into a unique and distinctive character. Single-family detached houses now prevail, with designs from the Federal and later periods, built primarily in the early decades of the twentieth century. Site design reflects influence of Frederick Law Olmstead, architect of the adjacent Roland Park community and other landmarks.

The area was included in the National Register of Historic Places on December 24, 2008, due its attractive and historic character.

Notes on the History of Bellona Gittings

Adapted by BGCA (2020) from reminiscences of Helen Ports and Thelma Bauer, edited by Eleanor Mason, and from Baltimore Neighborhoods by the Baltimore City Planning Department

Native Americans originally settled the present Bellona Gittings area and had established a north-south footpath through it in what has become the Bellona Avenue right of way. By the early 1800s this path became a carriageway connecting the York Road toll road to gunpowder works located just to the west. Over time this local roadway was known by many names, such as Powder Mill Road, Featherbed Lane, and Betty Bush Lane, until finally Bellona Avenue as it is today.

By the 1870s Charles Street and Gittings and Melrose Avenues had been established. Lake Avenue ran somewhat north of its present location and ended at Bellona Avenue. There were a half-dozen owners of large properties in the area, though none had the wealth or prominence of families on estates closer to York Road and in Govanstowne, such as the Perines, Abells, Pratts and Walters.

By the end of the 19th century only the E.G. Miller family still owned one of the original large estates. The Lake Avenue Land Company had purchased a tract between Lake Avenue and Gittings Road and subdivided it into 42 lots, and a few houses had been constructed south of Gittings near Bellona. 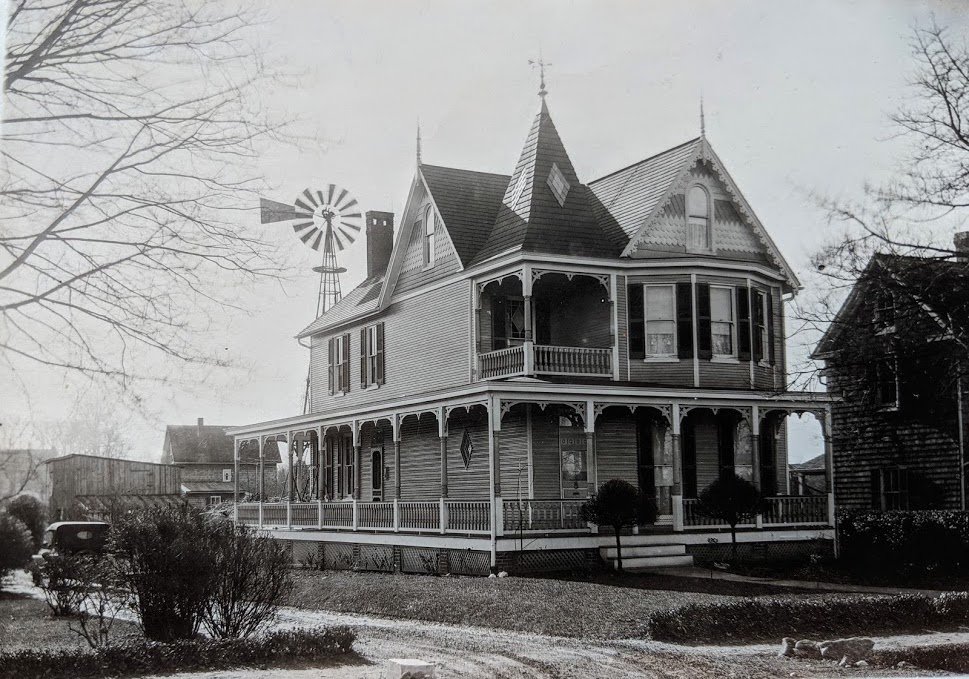 In 1897 Fred C. Bauer established a nursery on a 3-acre tract south of Gittings and west of Bellona. He and his employees constructed the first three houses to be built on the western portion of Hollins Road for use of the nursery workers. Just across Gittings, between Bellona and Mossway, the Moss Florist also had a nursery previously located at York and Homeland Avenues. Several other florists were also nearby. At about that time Francis B. Ports built a house on the south side of Gittings Avenue, which he operated as a butter business until about 1920.

By the 1920s Mossway was paved with cinders and called Wildey Avenue, after a local 19th century landowner. Early wood shingle cottages were built on Mossway and Hollins Road. And the Richards Grocery Store stood where the Pinehurst Wine Shop is located now.

Development progressed between the World Wars. By the early 1960s the present houses on Lake Avenue were completed. A working farm on Melrose continued into the 1970s before being sold by Mrs. Anderson for a development project. In the late 1970s another large tract on Lake Avenue with its remaining house was sold and developed as Fireside Circle and its townhouses. The last large parcel, the Bauer florist property, was sold and developed as 13 separate properties in the 1990s. Miss Thelma Bauer, who presided over the florist shop for many years, welcoming and helping her customers graciously and efficiently, is remembered in the naming of the street, Thelma Garth, in this newest development.